Agiliss, which means Agility in Latin, previously known as Tiremaster Foods division, started as a small corner shop in the capital Port-Louis selling principally rice, pulses and spices in 1954. This shop was the first to import basmati rice in the Paradise Island of Mauritius as well as yellow split peas and butter beans, the 2 most popular pulses consumed on the island. Initiated by his father Dan and his uncle Mohun, Rajesh Ramdenee started his career in this small corner shop where he held a multitude of roles, starting at the bottom and thereafter developing the business alongside his Father and Uncle.

In 1992, Mr Rajesh Ramdenee, started Tiremaster, a company which originally started with the wholesale and retail of tyre brands and related services through a modern state-of-the-art showroom, a pioneer at the time. In 1995, his father and uncle passed down the corner shop business to him which he added as a separate division to the existing Tyres business.

He eventually diversified the food business to include a packaging plant (the first company to introduce retail packing of pulses) and gradually expanded the product portfolio as well as the supplier and customer network. During the first year of Tiremaster Food Division, there were 5 employees, 20 products and a Rs 50m turnover, but there was always the vision to become a leading FMCG company of Mauritius. 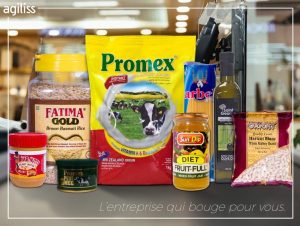 Today, the business is now one of the largest distribution centres on the island supplying Pulses, Basmati rice, Edible Oil, Milk powder and Canned products to Large supermarkets and hypermarkets, Small retailers, hotels and restaurants, Corporates and Government bodies. Agiliss has a storage capacity of more than 8,000 m2, the biggest in terms of metric volume distributed across Mauritius, 400 SKUs, a turnover of more than Rs 1.3 billion and with a team of over 300 employees.

Rajesh Ramdenee’s daughter, Sharon Ramdenee, joined the business in 2015 after a long career independently in England and Mauritius and took the seat of CEO in 2016. With the transformation that the business witnessed and at the dawn of further growth, it was timely to create a new identity that is solid, modern and avant-garde, playing on our major assets to expand our portfolio of international brands; strengthening our image and positioning and serving as a springboard for regional and international markets. Hence, Agiliss was born. The 2 ‘S’s in the Agiliss Logo and Design are the icon of our mark. This resembles a racetrack which gives the notion of speed, itself the basis of our agility, ability and proactivity. 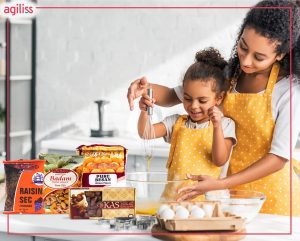 The Urban Music Awards aka UMA added Mauritius as the 15th country to launch and have partnered with Agiliss Ltd with an exciting collaboration as an official sponsor for the 2021 Mauritius Urban Music Awards aka MUMA for the first time ever. Agiliss has acquired the category of Best Female Act 2021 and is committed to encourage and support local talent with the vision of moving towards international.

Their motto is succinct with the MUMA, “To be at our best while making our customers’ lives better”. Enough stargazing! Agiliss invites all lovers of music and entertainment to vote for their favourite artists and engage with the hype by going to www.mokingo.com, registering and setting up your profile, and then heading to Polls in the main menu!

Biscuits to Meet Music Beats in This Year’s Mauritius UMA